I'll be keeping this updated with the latest adventures in establishing a mesh network in Phoenix. If you have anything you'd like to add, please contact me [KF7MBK] on 146.520 and I'll give you my email.

I acquired a 2W wifi amp (same as KG7ANL, and linked in the equipment list) and tried to connect to K7CQX from the hill again using the biquad. Oddly enough, this time he could see me, but I could not see him. Not sure what the problem was. After some time, we gave up. This time though I came prepared to try the longer link with N7SKV. This is a 9.6 mile haul, but with N7SKV's 24dBi antenna at 30ft and my elevation on the hill, it is a pretty good line of sight shot. The signal was weak, but we were both able to see each other! My biquad antenna is probably only about 11dBi. My intention is to mount it on an old tv dish which should give me closer to 30dBi, and will also (hopefully) be stealth enough to not attract any attention from the HOA. I think from my house to K7CQX (6 miles) or KG7ANL (5.1 miles) is doable if they can get their antennas high enough above the tree line. 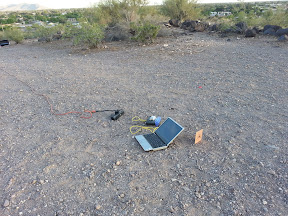 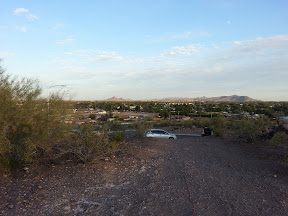 I tried again from the hill today and learned a lot. I built a biquad antenna using these instructions and wanted to try it out. This time I was not running an amp. I was able to receive a signal from K7CQX at about -80db but I was unable to transmitt to K7CQX. My guess is I need an amp...or more gain on the antenna.

KG7ANL and I tried to connect to K7CQX (1W Amp, 24dBi Grid antenna, 20ft) from a hill that gives us decent line of site 2.6 miles away. We were running a cheap Chinese yagi and a 2W amp but were unsuccessful. This may have been in part from confusion at both ends regarding what antenna port is the "left" and "right" in the software. Due to power problems we were unable to test pointing west towards N7SKV.